GPR Stabilizers are an American company. The GPR Stabilizer was born of frustration. Fed up with the lack of quality and selection at the time, Ralph and Randy Norman set out to make the best steering damper available for motorcycle racers. They started with an original design created from previous testing and prototyping. Helped by their background in aerospace manufacturing and design, it evolved into the dominant steering damper at any off road venue today. Now, with patents held in the USA and abroad, GPR has set its sights on the world motorcycle racing market.
WE ARE WORKING ON OUR ONLINE STORE!
​If your model bike is not yet on here, please check https://www.gprstabilizer.com/ for products and contact us via email or Ph 02 45672072 ​to check our prices and availability. 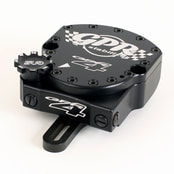 ​GPR V4D DIRT BIKE STEERING DAMPER
The GPR v4d is the fourth generation steering damper designed for dirt bikes and adventure bikes, but is also used on a couple of hybrid applications. Its compact and slim design allows for the damper to be mounted below the handlebars, out of harm’s way, without raising the bars more than an inch. Frame mounts are machined steel with stainless steel pin, and billet aluminum machined bar-mounts. Choose the GPR Pro Kit option and you’ll get a black anodized machined top-clamp.

V4d Pro Kit – Lowest profile damper set-up on the market. A Sub-mount kit, mounts below the handlebars. Using the GPR V4d dirt bike stabilizer, mounts the unit directly to the GPR triple clamp. Which allows the use of independent bar mounts with a forward and back bar position, 4 total Bar Mount position options. Mounting the unit flush on the triple clamp very closely resembles the stock bar height, with a rise of .100″ – .250″ on average. These kits include the GPR V4d Dirt Bike Stabilizer, the GPR upper billet triple clamp w/ bar mount, frame bracket and all the mounting hardware. The GPR V4 Pro Kit bar mounts are rubber mounted.  Because the V4D unit is mounted directly to the triple clamp the rubber absorption doesn’t interfere with the function of the stabilizer while adding a level of comfort for the rider. 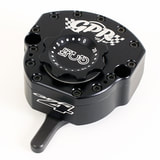 GPR V4S STEERING DAMPER
The GPR V4s, the fourth generation of the GPR sport bike application. This is specifically designed for sport and street bike applications and uses our patented pin-less mounting system. Slim design and large visible adjustment dial allows you to adjust the damping settings while you ride. Vital in changing conditions and temperatures. Since is debut in 2007, this kit has become a favorite of amateur and professional road racers worldwide. The Harley Davidson applications uses the same V4s steering damper and includes a beautifully machined billet top-clamp.

SPORT BIKES / STREET BIKES
The GPR V4s, specifically made for sport / street / road racing motorcycles. We’ve taken our proven patented fluid control technology and squeezed, trimmed, and lightened this model up to be exactly what the racers want. Smaller, lighter, faster. A large dial with a definite “no-slip” grip that locks into place with a positive “click” at 20 settings. Approximately 30% lighter than the GPR original street bike steering stabilizer. Shorter fluid ports, new valving, quicker reacting to high speeds.
Two wheel tuners “Brappy” award for “Best Road Racing Product of 2007”. “Massive improvement over the original model” – Superbike Magazine 2007.
Since its debut in 2007 this steering damper has been on championship and race winning teams in AMA Superbike, British Superbike, Australian Superbike, the Spanish CEV championships and in the Irish Road Racing series. The list keeps growing every season for a reason…It works! It does what a steering damper is supposed to do.
The GPR V4s steering dampers available to the public is the same championship winning sport bike steering damper that our race teams use. Bolt on applications only too. No holes to drill into your top clamp and no holes to drill into your frame. Light-weight mounting brackets and all in house prototyping insure a proper fit to your bike. This is the
​
​HARLEY DAVIDSONS
The Harley Davidson applications are developed using the same race proven street V4s street damper combined with a beautifully machined billet aluminum top-clamp. This eliminates the use of a “base-plate” mount, standard for our sport bike applications to secure the damper to. Results are a much cleaner look for the Harley models stock or custom.
And like all of GPR Stabilizer products, these are all bolt-on. No drilling, welding, or cutting to your original equipment.
Frame mounts are machined aluminum and steel hardware all anodized black. The damper colors available are black, red, blue, and gold. 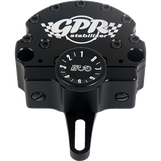